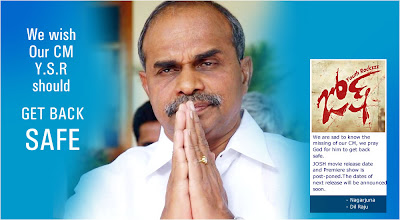 Andhra Pradesh Chief Minister YS Rajasekhara Reddy has gone missing while on his way from Karnool to Chittoor this morning (September 2, 2009). People all over the state are in panic mood. Everyone is praying for his safe return. Seeing the prevailing mood in our state, producer Dil Raju and hero Nagarjuna have decided to pospone the release of Josh. Nagarjuna is also very dear to Rajasekhar Reddy and his family. So he anounced that he is postpoing the release of his son’s maiden film Josh, which was to hit the screens on Thursday, Sep 3rd.

Posted by Sasidhar Anne at 11:40 PM No comments: