Ans:  We took all kind of incentives from the government like getting free land for studios/tax cuts etc …try to screw up the same industry. What more can the govt do? Fr yrs they gave cash subsidy to films , is there any scarcity for good writers and actors now.
When Telugu film producers council itself is not helping producers ,
Life membership is 1 lakh ,  and they say this to discourage new producers to become members. What happened to Budget control regulations?
Instd of showing concern at those real problems,
Is this right to blame the govt, which has done so much for the telugu film industry to establish in A.P.
11.‘Reducing the already low cinema ticket prices and controlling theatres are not the right answers."
Ans:  Multilplexes 150/- single screens 50/- these ticket rates might b low for u, Surely not fr the middle class …
During Piracy discussions on tv channels, 90% of the callers complained abt high ticket rates , and they adviced us ‘ reduce ticket rates first, then  we will not take piracy cd’s/ dvd’s.
There is no of Laws by laws and raliies to control piracy, FIRST REDUCE TICKET RATES.
We are requesting the govt to control lease system and the lessees, not the theatres.  Please be real.
=============
We need to do something to save the industry from disaster.
Posted by Sasidhar Anne at 11:22 PM No comments:

Yee Maya Chesave 100 days - special write up from me 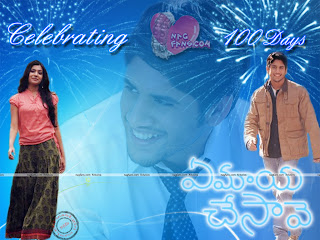 click on read more to view the complete article.

Thanks for the YMC team for giving us such a wonderful movie..
Posted by Sasidhar Anne at 11:10 PM No comments:

Email ThisBlogThis!Share to TwitterShare to FacebookShare to Pinterest
Labels: articles, My Views


Yesterday I watched the Premier show of VEDAM movie as I liked the GAMYAM movie(Directed by KRISH).


I would like to watch all movies b4 Reviews hit the Internet. So that we can watch the movie with our OWN mindset :)-


Thanks to Virginia for giving me the chance to watch Premier show(generally in India, it happens with only Celebrities).


VEDAM -- Its a new dimension of Telugu Cinema and I can say its ARTFULLY Crafted COMMERCIAL movie with lighter vein comedy elements with True performances.


Just go n watch. I can not say more than that. I wish you won't disappointed with this film.


Thanks to KRISH for giving the Wonderful movie.


I guess you surpassed the 2nd movie failure Tradition for Tollywood Directors.(After Rajamouli, its your turn now). All the very best for your all next ventures.


Worth Mentioned here --> Cinematography by : VS Gnana Sekhar


PS: Guys, After PRASTHANAM [Due to the lack of Promotion, it didn't go well], I feel this one is also very good sensible movie with Human Values. At least get Original DVD and watch it.


I wish you promote your 3rd movie in a bigger way(Vennala, Prasthanam, Whats next???). All the very best.