Presently an article on NTR is causing stir in the film circles in Hyderabad.Today times of india published an article about JR.NTR mentioning him as "MegaStar". Mega fans got angry this, at the same time Nandamuri fans also not so happy about this article,as they didnt want to call there hero with title of some other hero.
MegaFans arguing that when ever any body says '"Megastar" it will remind Chiru for Sure, then what is need to calling NTR as MegaStar'.Even Nandamuri fans saying that they didnt want there hero to be called as "Megastar" as he already had his unique title "YUVA NATA Ratna".
to check the complete article of TimesOfIndia which increased the mercury level between fans , click on read more
Original post in Times of India

I love being called NTR’s grandson:Jr.NTR


While most star sons and daughters you come across are busy getting away from the shadows of their parents and leave no stone unturned to refrain from being typecast mega star NTR Jr, the grand son of NTR, is the opposite .

Indeed, he candidly confesses that being born in a star family helped him kick start his career enormously. “It (being a megastar’s grandson) helped me largely in the first movie itself because people believe that you have the same aura and capabilities as your grandfather. But after that an actor can only bank upon his acting skills. I love being called NTR’s grandson. I never moved away from his shadow may be because I didn’t try enough or may be because I like it this way,” says NTR Jr, who is currently shooting in Jaipur for his upcoming mega-budget film Sakthi.

Needless to say, making the most of the opportunity, NTR explored Rajasthan as much as “his hectic schedule allowed” him. “I went to Ajmer just after coming to Jaipur as my mom wanted me to pay obeisance at the dargah. I have also been to Pushkar and will now get to see Jodhpur when we go there for the shoot. This place has loads of beauty and when you shoot here, it gives you a royal feel. In fact when audience knows that the film is being shot in Rajasthan, they also have expectations of relishing the majestic locales on screen.”

And contrary to his perception - that he is not well-known in North India - the star finds his fan following where ever he goes. “I think some of my films like Kantri have been dubbed in Hindi because I had thought who would know me here? But at Pushkar people recognised me and were shouting my film’s name. Isn’t that fabulous? South comprises of a mixed community but in North there are fewer South Indians and there’s a vast difference between both. I was like wow people do recognise you here?”

Down south the star is treated as a demigod with his fans bathing the actor’s cutout with milk before his film’s release, will he ever take a plunge in Bollywood? “Never,” pat comes the reply and he adds, “I am happy being king down south. It’s my world and I am destined to be here (Telugu film industry) I don’t even want to try my luck in Tamil films, but I might think of Bollywood
at some later stage.”

Indeed NTR doesn’t even want to change his image of a commercial hero and is not upbeat about being too experimental. “I am a commercial hero and I will never leave that genre. And having an image of a mass hero I will spoil the whole script in the wake of being too experimental. Then there are boundaries around a mass stirrer like me - audience buy the tickets of NTR Junior’s film with a larger-than-life image of his in their mind, who would give them an action-packed performance. So, I can’t flout the boundaries and disappoint them.” Point taken!

But would he ever take to direction or writing? “I believe in doing what I am best at. I don’t want to waste my energy in other things instead I would put all that in reaching the next level in a craft that I love the most.” As he once campaigned for TDP, do we see him donning the hat of a politician in the near future? “It is a different chapter of my life and I am not ready to open it now. Movies are my life and politics is a responsibility. I think I am too young for that.” However, it is surely the right age to tie the knot, so why the delay? But the shy actor makes a clean sweep from giving the reply, as he says, “I am a very shy person, who is just close to himself. So I would refrain from talking about my personal life.”

Posted by Sasidhar Anne at 3:08 PM No comments: Links to this post

Almost Hyderabad lo vunna major theaters annitilo ee movie vacche chance vundi antunnaru. Click on the image to view the Confirmed Theaters list for this leader Movie up to now.
Still there is strong chance of increase in theaters count. stick to this blog for more updates about the leader movie.
Posted by Sasidhar Anne at 9:40 AM No comments: Links to this post 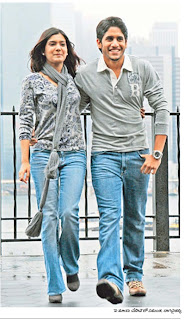 Sekhar Kammula and Rana About the Leader Movie - Interviews

Leader movie is all set to release by this 19th.ee movie gurinchi Hero Rana and Director Sekhar Kammula emmanaro vari matallo chudam.. to read the interview click on read more.
Click on the images to view bigger. 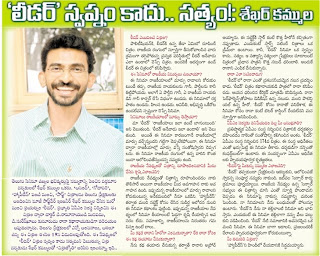 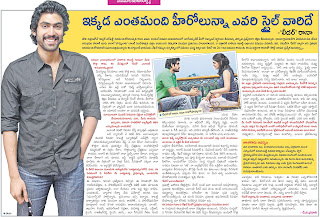 Posted by Sasidhar Anne at 9:18 AM No comments: Links to this post 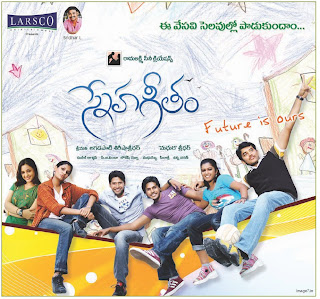