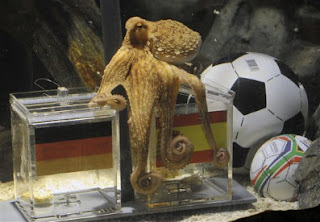 In Germany , there is a Octopus, which predicting the match result before the match and the result is coming as per its prediction.Its True!!!!!!!
The Octopus Name is "Paul". Here is the process..Paul’s technique uses two plastic boxes, one with a German flag and one with that of the team’s opponent, which are lowered into his tank. Each contains a tasty morsel of food, and the box that Paul opens first is judged to be his predicted winner.
and its prediction came true in quater's and early matches.. but semi final match prediction broke the hearts of Germany.. as it touched spain box(Check the photo above).
But according the numerology.. Germany has to win. and one more info is that This paul octopus.. predicted the wrong winner in 2006..
But finally i want to say one thing, which team plays well they will win on that day.. All the best for both teams.
Posted by Sasidhar Anne at 7:02 PM 2 comments: Links to this post

Email ThisBlogThis!Share to TwitterShare to FacebookShare to Pinterest
Labels: sports

Will Pawan kalyan create the history like Naga Chaitanya ??

Email ThisBlogThis!Share to TwitterShare to FacebookShare to Pinterest
Labels: pointeee