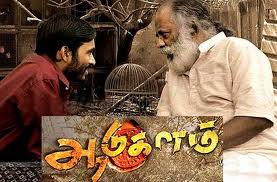 
After the tremondous sucess of Subrmaniapuram and parthiveeran, the style of tamil movie making changed completly. the stories from the raw tamil land are getting hit now a days. Danush's Adukalam movie followed the same steps and hit the bull's eye at the box office.
Story plot :- you will enjoy the movie, if i didnt reveal here.
Dhanush - After "kadhal kondien" movie, this is the movie in which ,i like the acting of dhanush.Up to now he fixed in the web of "mass popularity and image" , by this movie he breaks all the ice.what ever the scene in the movie, He excelled like any thing.The slang he uses in movie , comes out so natural and makes you to involve in his character.
Tapsee - i saw her first movie in telugu.In that movie they projected as a glamour doll, but in this movie vetri used her perfectly. The way she cries when danush proposes her and her experssions are so adorable.
Hero's master :- i dont know the name of this actor, but he is so natural and variations he potrayed in this character are un believable.
Music/GV - gv is increasing movie by movie.his music enhances the feel of the situation. BGM is so good.
Director - expect the unexpected!!!, the movie projects in a different way in trailers, but in the theater, there is some suprise waiting for you. Though second half became bit slow, that is ignorable.
+ves :-
1)Dhanush characterization.
2)pictuarisation of hen's fight
3)twists in second half.
4)Love track
5)Song placements, special mention to "Ootha Sollala" song.Normally at that situation any director will go for a "Kuttha" song , but in this movie they picturised that song according to the character of dhanush.
6)Interval block.
-ves :-
1) second half drags a bit.
2) un finished ending.
my word:- go watch this movie now :)
Posted by Sasidhar Anne at 5:44 PM No comments: Links to this post