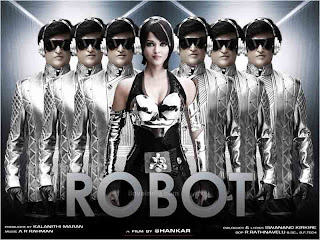 Still there are lot of confusion in the people about robo.. like, how the movie is? is the movie worth to spend 300 rs?. I think after reading this review you will get a good conclusion for all your confusions ;) Click on read more to view the review of robo.
All most all the web reviews covered the story of Enthiran, so i dont go to that point, i will just mention things which worked/ good in robo and at the same time about the spoilers in the movie.
Things worked in robo :-
1)Rajani kanth (who dares to say no ).
2)Aish - what a beauty she is? she is the perfect one who can created the love even for machine, she suits perfectly for the role.
2)First half comedy of Chitti , there are certain scenes which are really good with chitti..
ex:- Scene in the slum area, with all the chains and knifes, they bring the avatar of Amman to Rajani that scene looks awesome.
3)Under current action played by rajani. While seeing chitti , we didnt feel that its real rajani who is acting, we think as if a new robo bought and used in movie. It is really difficult to do such scenes.
4)villain Chitti is amazing, after a long time this movie shows rajani in negative shade. And man this -ve role is the main plus point of the movie.
5)There is a scenes, Where villain chitti tries to find the rajani in the group. This Scene is too good. In that Particular Scene Chitti demolishes one robo and says " Its Robo".. Amazing timing there!!!!!
6)climax part, i never imagine such hi-tech movie in indian screen.. Thanks Shankar for this!!!(Guys please dont compare with transformers movie, think the budget we spend on this scenes.)
7) BGM - Harima Harima used at its max in Second half and it created a great impact on Audience.
Things failed:-
1)Introduction of rajani, what ever the movie genre is people will expect grand entry of rajani.. but in this movie, the first shot on rajani is like as if they are showing a character actor in the movie.
2)Robo title song sung by Balu sir got wasted.
3)Most songs are wrongly placed well.. harima harima is the exception.
4)Second half intial 30 mins , people are rest less to see this scenes.
5) in the second half , we should not think any logic. still i didnt understand that how can a robo get fixed it self , even after it got dismantled.
6) how that robo got so many rajani masks.. and how can itseldf created its own team... (dont think!!!)
7) even if rajani is scientist, people expect him to fight back. but in this movie rajani runs along with aish when kalabhavan mani try to molest aish!!!, atleast shankar should have keep one comedy fight over there.
Postmortem :-
if you observe earlier shankar movies, love track is the minute thread which weaved along with a strong social message narration. Shankar is weak in handling the love , its already proved by boys. Same thing happened in robo.. robo is complete
man - woman - robo love story. there are no certain strong scenes to elavate how the love happened in robo and also between the lead pair.
The only saving grace for the movie is climax part.
Movie Enjoyment Analysis :-
first 20 mins - looks ok , After chitti entrance - its good , Interval part is fine.
Second half - boring first 30 mins and terrific last 30 mins.
final word :- go with zero expectations and prepare yourself that this is not rajani type of movie and final word is dont compare with any hollywood movie.. then you will enjoy this movie.
ps:- After Spending 300 rs for the movie, u may think that is this movie is that much worth??? But that problem wont come when you watch with 100 rs... Thats the reason.. Movie got bad talk in tamil nadu and overseas...

Posted by Sasidhar Anne at 11:08 PM No comments: Links to this post