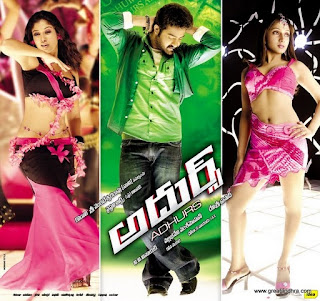 NTR ki pedda Adhurs cheppali.NTR ante upto now every body think that he can do only Mass type of characters but in these he tried to attract family audience and he was succeded in that.Though iam not a big fan of chiranjeevi , i liked him because of his mass entertainment like shankarDada etc.., that type of action is very difficult to do,but in present generation of actors NTR Did like that and he succeded and prooved himself as strong contender for number uno position.Chari ga NTR acting was really good he mould his body,diction and dialogue delivery like pakka brahmin.believe me guys u will like this Chari Character right from the first scene.

in song 1, Song 3, Song 6 NTR rocks the dance steps, comedy timing he maintained is amazing.totally i can say one thing NTR Rocks. Next big pillar of this movie is "Brahmi". He showed us again that why he called as "Hasya Brahma".Vamma NTR tho chesina scenes aithey chala funny ga vunnayi..VV vinayak Direction lo ee movie ledu,no chasing and blasts.. out and out comedy , but vinayak failed at certain times in the movie.that i will discuss later in this review. 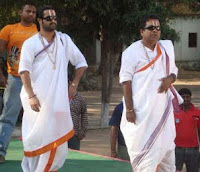 Movie is entertainer, but that is not the excuse to make the movie illogical, there are some -ve points they are here:-

1)Heroines , no body know why they are in the movie, atleast nayan was used for comedy track between NTR and Brahmi.But Sheel will come before the song and after that she will vanish. in the movie totally she is having 5 dialougues.

2)Sayaji shinde character will miss in the second half no continuation, and suddenly he will come in the climax and he will die.

3)Even for small characters why they used big actor, and lavish sets for don house, are they really needed.

5)Despite of the high production values , there are some scenes where graphics looks bad.

Worth scenes to watch :-

over all ga oka mata lo cheppali ante out and out family entertainer.Verdict we have to wait and see. 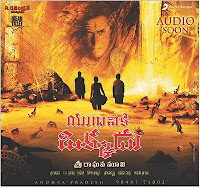 with n number of hopes,hypes and hoopla these movie got released.Even some one said that this movie is the answer to telugu industry for Magadheera from tamil industry.at the same time this movie is going to get released in telugu as "yuganiki okkadu". for this movie review click on read more.

if the movie first half is too good and at same time second half completely let down the viewers, what will happen. this movie is the perfect answer for that .. First half was brilliant and too good, we will expect the same from second half but the irony is that second half was a big mess.It test the patience of the viewers and heard shouts from lot of the people in the second half.This should be an eye opener for many talented tamil directors who wasted lot of money in name of "Reality".

Coming to the movie, this movie about the rivalry between the cholas and pandians, at 12th centuary pandains attacked cholas at that time , some cholas got escaped with the prince and lot of wealth. No body know where all they went.Not the plot shift to present, archaeology tries to find that wealth.Hero is the helper for this,Reema Sen is the lead and Adrew is the navigator.

Then on their way to the path, these team will experience 7 difficulties at these part movie was too good and every body loved.Finally hero, 2 heroines reach the Chola kingdom when remaining people are still finding the way.up to here movie was excellent and brilliant and par matched with Hollywood levels.After reaching the empire lead characters will became suddenly mad and run after each other to kill themselves.Here the interval plot.every body was stunned for the bang and remained silent, i think all of them in the theater thinking why they became mad??? i found why.. that will reveal later.

second half starts as well as the torture.. now we come to know that cholas who run away at 12th centuary, they stay here for generations that they had a belief that one savior will come and take them away.introduction of cholas was irritating they showed as "Rock aged people".All the cholas they try to kill the theses three people, then suddenly reema showed here bare back and convey them that she is also a chola one.then follows some irritating and unconventional scenes between reema and parthiban.Then reema tells the flashback that she is "Pandian" and she want to kill these remaining cholas ,that's why she headed these team. She will give information to military about these people.

in the mean time, after some waste , frustrating scenes which will test your patience,cholas came to know that "karthi" is the one who came to save.Then a big fight between military and chola army.Sounds funny,view this it looks more funny reema sen stands with attire of 12th century and will give orders to military, then military will capture all the cholas and take them as slaves, on there way they will kill all the cholas women including queen, by seeing with king will die. oh god!!! this is the response in the theater, every body is waiting when the movie is over and what will be the climax.

Suddenly prince of chola will run away from military and karthi follows him, military searches for them and they cant able to locate them. Now hero get up with Prince in his hand and its "THE END".wawww what a way to end the movie. Now i understand why the director shows all the three lead characters got mad before interval,Its a indication for all of us that we have to run like this from theater after the movie.

Beware of this movie by seeing trailers don't go. if u want to watch,go see the first half . in the interval straight away go to your home. don't turn else u will become mad.wait for DVD.

taking about the actors, every body excelled in there way, and gave excellent action but movie overtakes all the effort given by them, which makes to u forget there efforts.

Punch Line :try to keep away from this movie

Posted by Sasidhar Anne at 7:00 PM 3 comments: Links to this post


Where is the Pancha Kattu..

NTR / TALLA PELLAMA 50 years and about his Greatness 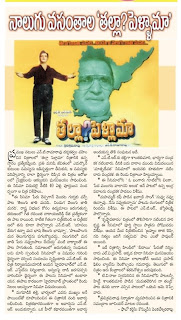 Posted by Sasidhar Anne at 11:58 AM No comments: Links to this post 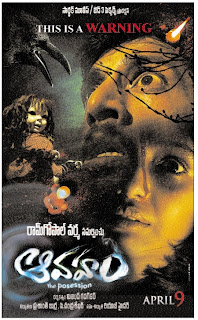 Posted by Sasidhar Anne at 11:51 AM No comments: Links to this post Posted by Sasidhar Anne at 11:13 AM No comments: Links to this post