The movie which increased the range of Telugu films, and the movie which made movie buffs to think about "Graphics", Its none other than "Ammoru" movie. I still remember the days when it was released. i was studying 7th at that time. i went to that movie alone. i never forget the next three days. i got fever for three days.That is that movie impact!!!!!!!!! . I think there will be lot who had similar stories.
At that time, in the theaters which the movie got released was changed as a temples.even they disturbuted prasadam in the theater. i came across an article about that movie today. so iam posting that here. njoy... 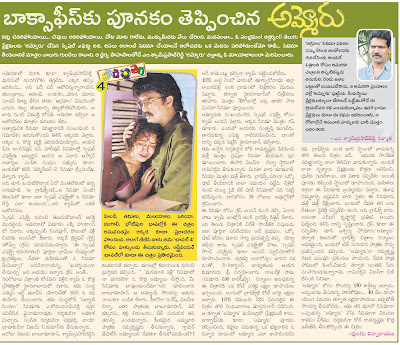 In the above article shyam prasad reddy told some amazing facts about that movie.Intially the villain the movie is "Chinna" and they finished shooting in 70 days. After seeing rushes shyam was not satisfied with the outcome. he reshoot back the whole movie!!!!! this time he changed the director and appointed "KODI" as director.who directed movie in an amazing way.

Posted by Sasidhar Anne at 4:07 PM No comments: